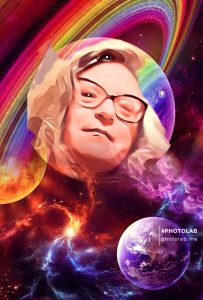 (listen to the poem, read by the author)

My Mutant lineage has always been cosmically tainted, Reed. I can’t refute my Mad blood–it proves there is evidence of me. Such Fantastic Foibles never really make any sense. Besides, no matter how rational your argument may seem, the Crip stays in the picture.

Image description/alt-text: Stylized selfie of the author on top of a bright rainbow planetoid with tilted rings (not the man in the moon, but the Crip in the planet). My head is tilted, I’m wearing glasses, I have shoulder length brown hair, my left eye is squinting slightly, and I have a slight smile on my face. Other celestial phenomena fill the second half of the image including a yellow sun, an exploding star in shades of red and blue, a bright purple planetoid, and a pink and purple gaseous nebula with blue lightning shooting out of it. In the lower right-hand side is a semi-transparent watermark with #PHOTOLAB and photolab.me. 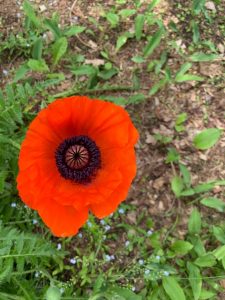 (listen to the poem, read by the author)

Just take hold, tightly. Embrace the Monster, play with the petulant platypus Crip child, dance with the Wicked Wiccan of the Seven Sapphic Sisters cluster. Pleiades platitudes, Wanda. I can’t help myself. My Mad sleeping dragon must awaken, even if it’s all just a dream.

Image description/alt-text: A red-orange poppy flower photographed from above, appearing like a red-orange dragon’s eye. Below the flower are sprigs of tiny blue flowers and other sparse green plants on a bed of brown dirt and leaves and leaves

The Micro Mutant Postcard Project is an ongoing endeavor seeking to meld poetry, confessions, memoir, and imagery with pop culture, especially comic books, and identity, including disability, using specific conventions to bring forth creativity and explore intersections the author has perhaps not yet publicly revealed.

Some postcards are memoir, others manifestos, and many are confessional, either addressed to pop culture figures and characters or written as self-revelations and larger burning or rhetorical life questions.

Read Rachael Zubal-Ruggieri’s review of Neuroqueer Heresies: Notes on the Neurodiversity Paradigm, Autistic Empowerment, and Postnormal Possibilities in this issue of Wordgathering.

Rachael A. Zubal-Ruggieri is the Administrative Assistant of the Office of Interdisciplinary Programs and Outreach at the Burton Blatt Institute. Mother to an Autistic teenage son, Rachael writes and presents about neurodiversity and autism parenting, seeking to debunk and disrupt traditional representations of “the autism mom.” She is a recent graduate of the Human Development & Family Science program at Falk College, with a Disability Studies Minor, at Syracuse University (SU). Her research interests include Creative and Design Thinking, Technical Documentation and Usability, Technology and Disability, and Parent and Family Involvement in Education. Rachael has dedicated her career to improving the lives of people with disabilities, including broad-based support to multiple disability rights initiatives on campus, in the CNY area, and nationally, through many grant-funded projects and opportunities and via long-term relationships with community agencies and programs. Rachael worked for over 30 years at the Center on Human Policy at SU. She is a founding member of the university’s undergraduate disability rights organization, the Disability Student Union (DSU). Rachael’s current activities include her roles as Co-Advisor of the Self-Advocacy Network (formerly Self-Advocates of CNY), and as a Board Member of Disabled in Action of Greater Syracuse, Inc. Rachael is also co-creator (with Diane R. Wiener) of “Cripping” the Comic Con, the first of its kind interdisciplinary and international symposium on disability and popular culture, previously held at SU. At conferences and as a guest lecturer, she has for many years presented on the X-Men comic books, popular culture, and disability rights and identities.

Editor’s Note: As of the Spring 2022 issue, Rachael has been appointed as Wordgathering‘s Assistant Editor! Huzzah!

Wordgathering: A Journal of Disability Poetry and Literature (ISSN: 2690-7089) is a digital, Open Access journal of disability poetry, literature, and the arts. Submission and quarterly publication are free. Authors and other contributors retain copyright to their work. Effective Volume 14, Issue 2 (June 2020), work is published here under the Creative Commons Attribution-NonCommercial-NoDerivatives 4.0 International license. This arrangement is made possible by generous support from the Office of Interdisciplinary Programs and Outreach at the Burton Blatt Institute (housed in the College of Law at Syracuse University) and the Syracuse University Libraries.