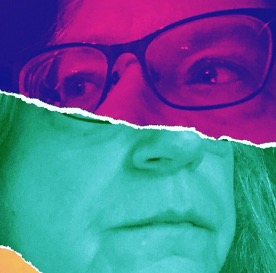 Before streaming, smart phones, and gaming consoles, Columbia House was my frequent sidekick, and drowned in music, my mind could never stay quiet. The bones of birds gave me proof of life, but was I the living dead or the power girl of my dreams?

Image description/alt-text:  Stylized filtered photograph of the author with bright fuchsia and purple, and light green in a split screen with paper torn into opposite facing images; the top half features the authors eyes and glasses facing their right looking off screen, and the bottom half with the nose and mouth, facing their left with an unsmiling mouth. 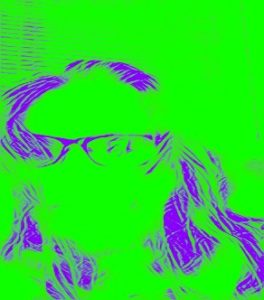 Others equip me well; they pepper my prolific narrative. Prince. Bowie. Mercury. I was Ziggy for a while. Earth to RZ, I couldn’t stand to see you, so I walked out, even though my brain thought we were soulmates of a kind. Cheap Tricks indeed.

Image description/alt-text: Stylized filtered photograph of the author wearing glasses sitting in front of blinds with a mostly bright green background, with parts of their hair and glasses outlined in purple grape lines. In the left lens of their glasses is a reflection of the author’s cell phone used to take this selfie. 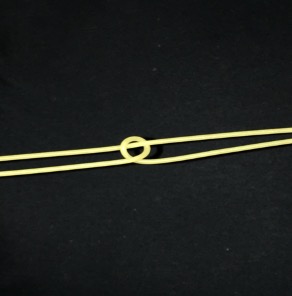 Kinky tulips, curly pasta. My contemporaries, my muses, let’s commiserate; let’s bond. Eleven, Leia, Ridley, Rey, we should have a drink sometime. My power is your power, don’t you think? Alpha, Beta, Gamma, Omega levels be damned. Crip solidarity. To infinity and beyond. With sprinkles.

Image description/alt-txt: color photograph of two pieces of uncooked pasta with a black background. One piece of pasta is curled around the one above it.

Rachael A. Zubal-Ruggieri is the Administrative Assistant of the Office of Interdisciplinary Programs and Outreach at the Burton Blatt Institute. Mother to an Autistic teenage son, Rachael writes and presents about neurodiversity and autism parenting, seeking to debunk and disrupt traditional representations of “the autism mom.” She is a non-traditional student in the Human Development & Family Science program at Falk College, with a Disability Studies Minor, at Syracuse University (SU). Her research interests include Creative and Design Thinking, Technical Documentation and Usability, Technology and Disability, and Parent and Family Involvement in Education. Rachael has dedicated her career to improving the lives of people with disabilities, including broad-based support to multiple disability rights initiatives on campus, in the CNY area, and nationally, through many grant-funded projects and opportunities and via long-term relationships with community agencies and programs. Rachael worked for over 30 years at the Center on Human Policy at SU. She is a founding member of the university’s undergraduate disability rights organization, the Disability Student Union (DSU). Rachael’s current activities include her roles as Co-Advisor of the Self-Advocacy Network (formerly Self-Advocates of CNY), and as a Board Member of Disabled in Action of Greater Syracuse, Inc. Rachael is also co-creator (with Diane R. Wiener) of “Cripping” the Comic Con, the first of its kind interdisciplinary and international symposium on disability and popular culture, held at SU. At conferences and as a guest lecturer, she has for many years presented on the X-Men comic books, popular culture, and disability rights and identities. She’s also a huge Batman and Deadpool fan.

Wordgathering: A Journal of Disability Poetry and Literature (ISSN: 2690-7089) is a digital, Open Access journal of disability poetry, literature, and the arts. Submission and quarterly publication are free. Authors and other contributors retain copyright to their work. Effective Volume 14, Issue 2 (June 2020), work is published here under the Creative Commons Attribution-NonCommercial-NoDerivatives 4.0 International license. This arrangement is made possible by generous support from the Office of Interdisciplinary Programs and Outreach at the Burton Blatt Institute (housed in the College of Law at Syracuse University) and the Syracuse University Libraries.